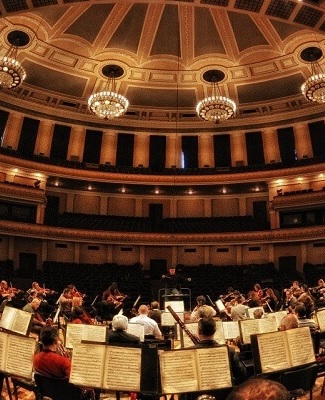 The Armenian National Philharmonic Orchestra (ANPO) was founded in 1925 by Arshak Adamyan and Alexander Spendiaryan. For many years it has been considered as one of the leading orchestras of the former Soviet Union. Today, it is a national center of the professional orchestral music in Armenia.

The Armenia National Philharmonic Orchestra’s home is the Aram Khachaturian Concert Hall, one of the architectural pearls of Yerevan designed by Alexander Tamanian. It hosts an audience of 1300 seats.

Being led to the new millennium by Maestro Eduard Topchjan the ANPO is committed to promoting cultural, musical awareness in local audiences, by regular performances of classical and contemporary music in addition to operatic repertoire.

Since its foundation, the orchestra has performed most of the classical repertoire. Besides, the ANPO widely presents works of the Armenian composers, including premieres of the new works in the program, which are of much interest for both Armenian and foreign audience.

The orchestra’s performances have been led by Alexander Melik-Pashayev, Willy Ferrero, Franz Konwitschny, Kurt Masur, Valery Gergiev and many other celebrated conductors. For five successive years, Maestro Valery Gergiev has been the Artistic Director and Principal Conductor of the ANPO.

The renowned composers such as Gia Kancheli, Sofya Gubaidullina, Rodion Shchedrin have closely cooperated with the ANPO. Aram Khachaturian, Dmitry Kabalevsky, Krzysztof Penderecki and other composers have conducted their works with the Armenian National Philharmonic Orchestra.

The ANPO tours regularly and serves as a unique Ambassador of Armenian music worldwide. A number of internationally acclaimed Armenian soloists have appeared with the ANPO, among them: Sergey Khachatryan, Kim Kashkashian, Sergei Babayan, Isabel Bayrakdarian, Suren Bagratuni, Alexander Chaushian, Narek Hakhnazaryan and others.

Since 1989 the ANPO has toured extensively throughout the USA, Canada, Austria, Germany, France, Switzerland, Luxembourg, Lebanon, Spain, Portugal, the United Kingdom, Greece, Iran, Cyprus, Turkey, Russia, and the UAE. Among the most interesting tours it is noteworthy to mention the tours to Japan in 2008 with 15 concerts, Germany and Slovakia in 2010, in 2014 and 2015 to Italy, Germany, Poland, USA, Mexico and Scandinavian countries. On July 12, 2016 the ANPO appeared at prestigious “Stars of the White Nights” festival with a concert at St. Petersburg’s Mariinsky Theatre. In 2017 the orchestra toured Spain and Germany. In 2018 appeared in prestigious Berlin hall – Konzerthaus.

On the occasion of its 90th anniversary, the ANPO was awarded with the “Coats of Arms of Yerevan” commemorative medal by the Mayor of Yerevan.

Since 2007 the Armenian National Philharmonic Orchestra hosts the annual Yerevan International Music Festival, held in autumn. The internationally acclaimed soloists participate in the festival, appearing in symphony and chamber concerts and giving master-classes to Armenian musicians. Eduard Topchjan and Alexander Chaushian are the Artistic Directors of the festival.

More than 40 CDs have been released with the orchestra’s recordings. Among the latest releases are the “Armenian Rhapsody” (2011, BIS Records, Sweden), Mozart Piano Concerti  KV 238,415 and Overtures to Marriage of Figaro and Don Giovanni (2014, Oehms Classics, Germany). The recordings have been highly acclaimed by the international reviewers.

In 2017 a special edition CD “Mozart-Komitas-Khachaturian” was released in the United States through the Armenia Fund USA (Eastern Region Affiliate), with 10.000 copies print-run.

The Armenian National Philharmonic Orchestra continues its versatile artistic activity in line with the requirements of international musical life. 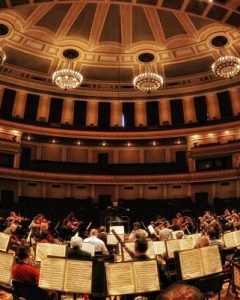 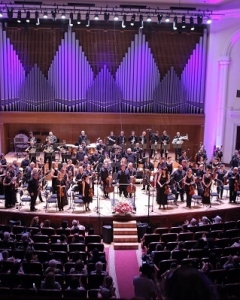